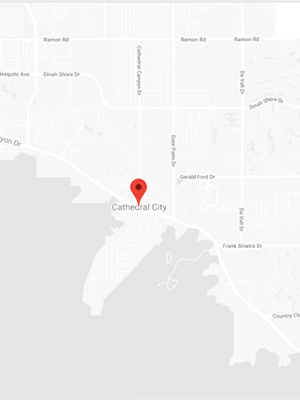 Fun fact: Cathedral City’s name dates back to 1850, when Colonel Henry Washington of the U.S. Army Corps of Engineers noted the landscapes made by the local canyons resembled the interior of a grand cathedral.

There’s more to Cathedral City than golf, though. Don’t miss out on the great dining options thorughout the area, as well as numeorus entertainment options including the Coachella Valley Repertory Theatre and Cathedral City Community Ampitheater. Some of the annual events happening in Cathedral City include the Taste of Jalisco Festival, LGBT Days, and the Hot Air Balloon Festival.

Cathedral City`s downtown has been undergoing a thorough revitalization since the late 1990’s. Included in the revitalization was a newer City Hall,  the Mary Pickford Theatre movie complex, and 130 acres of new or remodeled businesses. In 2016, the CV Repertory relocated to downtown, expanding their theatre presence in the desert area.

As more devleopments are to come, the Cathedral City is primed for continued growth.